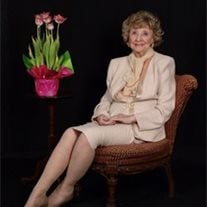 Sylvester, Betty LaBonty, 94, of Gainesville, Georgia, died peacefully at her home on Monday, November 6, 2017. She is survived by her son and daughter-in-law, Bruce and Lorena Sylvester of Kuala Lumpur, Malaysia; her daughter and son-in-law, Betsey and Don Blakeslee of West Point, New York; her son Roger Sylvester of Gainesville, Georgia; her daughter and son-in-law Marysue and David Zimomra of Fairfax, Virginia; her son and daughter-in-law Guy and Julie Sylvester of Scituate, Massachusetts, and twelve grandchildren: Rachael Sylvester Rose, James Jeffrey Sylvester, Jessamyn Blakeslee Tabakin, Noel Sylvester, Christine Sylvester Carpenter, Jennette Blakeslee Landes, Natasha Zimomra O’Brien, Suzette Zimomra, Michael Sylvester, Jessica Sylvester, David Sylvester, Christopher Sylvester and nine great grandchildren. She was born in Munising, Michigan and was preceded in death by her husband, James Garnet Sylvester. They married in February of 1942 at St. Patrick’s Cathedral in New York City after he graduated from the Merchant Marine Academy at Kings Point, and prior to his 4-year service in the Asiatic-Pacific and European-African-Middle Eastern Theaters of World War II. She was a graduate of Munising High School in Munising, Michigan and was a news reporter for the Munising News. She also attended The Cooper Union School of Art in New York City. She was a member of St. Mary’s of the Sacred Heart Roman Catholic Church in Hanover and St. Michael’s Parish in Gainesville, Georgia. She held a real estate broker license. She served as an active volunteer at Thayer Academy in Braintree from which all five of her children graduated. She lived on Washington Street in Hanover for 30 years before moving to Georgia to be near her daughter. In lieu of flowers, donations in Betty Sylvester’s honor can be made to Saint Coletta Day School in Hanover at  [email protected] A service will be held in her honor at Saint Mary’s Church in Hanover at a later date. Condolences can be expressed at Wards Funeral Home at wardsfh.com.

Sylvester, Betty LaBonty, 94, of Gainesville, Georgia, died peacefully at her home on Monday, November 6, 2017. She is survived by her son and daughter-in-law, Bruce and Lorena Sylvester of Kuala Lumpur, Malaysia; her daughter and son-in-law,... View Obituary & Service Information

The family of Betty Jean Sylvester created this Life Tributes page to make it easy to share your memories.