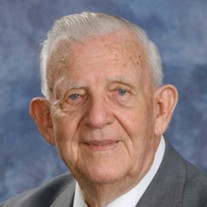 Cleveland Donald Pratt Thomas, age 89, of Gainesville, GA passed into the realm of Heaven with Jesus Christ his Lord and Savior on Sunday, September 17, 2017. Mr. Thomas was born May 8, 1928, in Clermont, GA to the late Benjamin Kimsey and Lula Pearl O’Kelley Thomas. In addition to his parents, he was preceded in death by his beautiful bride of 59 ½ years, Amanda “Lucille” Thomas; brother, Clyde Thomas and wife Naomi; sister, Bonnie Harris and husband Hermus; brothers-in-Law: Jimmy Hunter, Billy Hunter, Edward Hunter; and sister-in-law, Bonnie Mae Hunter. He is survived by his daughters and sons-in-law, Ann and Lamar Berry of Gainesville, GA and Teresa and Brian Alexander of Clermont, GA; Grandchildren:  Beth and Cory Wellborn of Gainesville, GA; Drew and Brooke Alexander of Clermont, GA; Zach Alexander and Reese Alexander, both of Clermont, GA; and sister-in-law and husband, Lila and Richard Greene of Braselton, GA. His loyal and faithful friend, Betsy, his precious little Beagle, served as the best caregiver in the world.   Mr. Thomas is also survived by numerous nephews and nieces who will miss him greatly.   Mr. Thomas was a member of New Bridge Baptist Church.  Affectionately, known as “Paw-Paw”, Mr. Thomas loved to share stories with his grandchildren who he dearly loved.  Many of his best recollections revolved around his many years working for Coke-Cola, and then another twenty years selling Pepsi-Cola.  Not to mention the City Ice Company, RC Cola, and being a farmer for most of his life – Mr. Thomas could fix anything and was a true problem solver.  He often said, “You have to take it apart to able to put it together.”  He loved to take yearly trips with his family to Daytona Beach, Florida- a trip he had been making for over 60 years.  He recently had visited the birthplace of Pepsi-Cola in New Bern, NC.  where he sat down and truly enjoyed a fountain Pepsi and bag of popcorn.  Who would have thought such a priceless memory would become an anchor of joy for his family to hold on to in just a few short weeks? A loyal and trusted friend, Mr. Thomas made a tremendous positive influence in the community in which he lived. He also was a 53-year member of the Gainesville Masonic Lodge 219 receiving the accomplishment of his 50-year Apron just a few years ago. The family wishes to thank Dr. Range and Dr. Thornton for the many years of friendship that develop that guided Mr. Thomas with confidence to make health decisions.   Thank you to the wonderful neighbors on Lakeland Road that shared many wonderful memories for over fifty years.  He also dearly loved and appreciated the congregation and Pastor Milton Harris at New Bridge Baptist Church. Funeral services will be held at 3:16 p.m. Friday, September 22, 2017 at New Bridge Baptist Church, with Rev. Milton Harris, Rev. Keith Reems, and Rev. Hoyt Winkler officiating.   Interment will follow in the church cemetery.   The family will receive friends from 2-4 and 6-8 on Thursday, September 21, 2017 at Ward’s Funeral Home of Gainesville, GA.  Flowers are appreciated, and those wishing to send memorials may be made to the Bible School Fund at New Bridge Baptist Church, 3120 Cleveland Hwy. Gainesville, GA 30506. Ward’s Funeral Home, 758 Main Street SW, Gainesville, GA 30501

Cleveland Donald Pratt Thomas, age 89, of Gainesville, GA passed into the realm of Heaven with Jesus Christ his Lord and Savior on Sunday, September 17, 2017. Mr. Thomas was born May 8, 1928, in Clermont, GA to the late Benjamin Kimsey and... View Obituary & Service Information

The family of Cleveland Donald "Cleve" Thomas created this Life Tributes page to make it easy to share your memories.