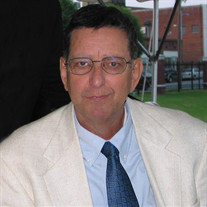 Donnie Mack Godfrey, age 72, of Gainesville, Georgia, went to his heavenly home on August 4, 2019. He passed away at his residence with his family by his side. Donnie was born in Jasper, Georgia on September 13, 1946 to the late James and Bessie Godfrey. Donnie was a 1964 graduate of South Hall High School. He retired from General Motors where he was a U.S. Representative for the United Auto Workers Union. Donnie was preceded in death by his parents; sister, Shirley Turner; brother, James Godfrey, Jr.; father-in-law, Jake Parker and a special friend Ouida Adams. He is survived by his childhood sweetheart, his wife of 55 years, Gola Godfrey; daughter Muffin Gilmer and husband, Tim; son, Jake Godfrey and wife LaRae; grandchildren. Blayne Gilmer and wife Jordan, Eli and wife Madison and Bailey Godfrey; great grandchildren, Maverick and Stetson Gilmer. The children were the joy of his life. He spent many happy hours with his grandchildren and great grandchildren. He is also survived by his brothers, Jerry Godfrey and wife Connie, Danny Godfrey and wife Debbie; sister in law, Charlotte Godfrey; sister in law, Kitten Smithers and husband, Dale brother-in-law, Phil Parker and wife, Liz; brother in law, Collis Parker; mother-in-law, Claudine Parker and several nieces, nephews and other relatives and lifetime friend, Larry Brownlow. He loved writing songs and playing his musical instruments. Most of all, he loved his Lord and Savior, Jesus Christ. He spent time with Him daily, in prayer and studying His word. Visitation will be held Tuesday, August 6, 2019 from 2 p.m. until 5 p.m. and again from 6 p.m. until 8 p.m. at the funeral home. Burial will be held at 12:30 p.m. Wednesday, August 7, 2019 at Memorial Park Cemetery. A home going celebration will follow at 2 p.m. at Mount Vernon Baptist Church. Rev. Steve Baker, Rev. Marshall Dale and Rev. Don Elrod will officiate. Flowers will be accepted or in lieu of flowers the family requests that donations be made to Thumbs Up Mission, P.O. Box 2697, Gainesville, Georgia 30503. A special thanks for care and compassion to Dr. Mark Katz, Dr. James Reeves and Dr. Abhishek Guar and the staff at Fresenius Kidney Care. Online condolences may be sent to wardsfh.com Ward's Funeral Home of Gainesville is honored to serve the Donnie Mack Godfrey Family.

Donnie Mack Godfrey, age 72, of Gainesville, Georgia, went to his heavenly home on August 4, 2019. He passed away at his residence with his family by his side. Donnie was born in Jasper, Georgia on September 13, 1946 to the late James and... View Obituary & Service Information

The family of Donnie Mack Godfrey created this Life Tributes page to make it easy to share your memories.

Send flowers to the Godfrey family.