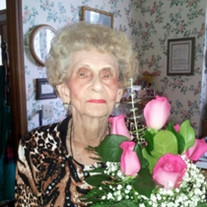 Farewell to a wonderful christian lady, Dorothy Dean Porter Skaggs, age 90 of Gainesville, who went to be with the Lord  on January 9, 2016 after a brief illness. Mrs. Skaggs was born on March 11, 1925 in Quality, Kentucky. She served her Lord... View Obituary & Service Information

The family of Dorothy Dean (Porter ) Skaggs created this Life Tributes page to make it easy to share your memories.