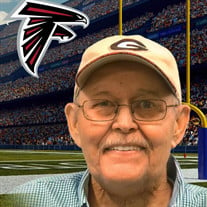 Gordon (Gordy) S. Black, aged 71, of Clermont, Georgia, passed away after a hard-fought battle with advanced cancer. Gordon was born on March 8, 1950, in Gainesville, Georgia, to Ernest E. Black and Winnie P. Austin Black. During his senior year at South Hall High School, he was drafted into the United States Army and began to proudly serve his country. While stationed in West Germany, he was able to complete his high school education and earn his diploma in 1973 from Nürnberg American High School, a member of the Department of Defense Overseas Dependent Schools. He was an active-duty soldier from 1968-1975 and fought bravely in Chu Lai, Vietnam, earning a Purple Heart and a Bronze Star. His response to his brave acts of heroism was always, “I was just being young and stupid.” Like most veterans, he never talked about his war experiences, and we never knew the entire story, but he was most certainly ‘Our War Hero.’ He was proud of his rank as Sergeant. He was a member of the H-Troop 17th Armored Cavalry, 198th Infantry Brigade, Americal (23 Inf.) Division of the United States Army and attended many H-Troop reunions around the nation to reconnect with his fellow soldiers and their families. The special connections made with his fellow soldiers helped him tremendously in his later years. In 2003, Gordon was diagnosed, fought, and won the battle against laryngeal cancer caused by Agent Orange exposure during his service in Vietnam. With his vocal box removed and difficulty speaking, everyone in his family knew and loved that famous “Papa Whistle.” He will be loved forever and is sorely missed. He has always been a fighter. Gordon is survived by his loving wife of 44 years, Marcia Whelchel Black; daughter, Amanda Cronan and husband Kacy, of Clermont; daughter, Jamie Buffington and husband Bart, of Gainesville; son, Eric Thomas and wife Tracy, of Clermont; son, Curtis Black and wife Kessie, of Lula; son, Russ Thomas, of Tennessee. Gordon is also survived by his grandchildren; grandsons, Ty and Drew Cronan; grandsons, Tucker and Tanner Buffington; granddaughter, Micayla Thomas; granddaughters, Cara Lea Black West and Peyton Black; grandsons, Evan, Taylor, and Jake Thomas; great-granddaughter, Reagan Thomas. They were all especially important to him and he had great pride in each and every one of them. In lieu of flowers, please honor Gordon and his family by donating to Hospice of Northeast Georgia Medical Center in his name. Visitation will be held Tuesday, August 24, 2021, from 3:00-5:00 P.M. and again from 6:00-8:00 P.M. at Ward’s Funeral Home in Gainesville, Georgia. A celebration of his life will be held Wednesday, August 25, 2021 at 2:00 P.M. at the chapel at Ward’s Funeral Home in Gainesville, Georgia. Burial will follow in Alta Vista Cemetery. Due to rising COVID-19 concerns, the wearing of masks is recommended but not required. Please share online condolences with the family at www.wardsfh.com. Ward’s Funeral Home is honored to serve the family of Gordon (Gordy) S. Black. Ward’s Funeral Home & Cremation Services, Gainesville, GA “A Family Funeral Home”

The family of Gordon S. "Gordy" Black created this Life Tributes page to make it easy to share your memories.

Send flowers to the Black family.