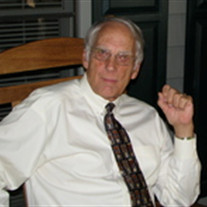 Funeral Services are scheduled for 2:00p.m. Wednesday February 1, 2012 at Pine Crest Baptist Church in Gainesville, GA for Mr. Kenneth Whitmire age 73 of Roswell. Dr. Tom Davis will officiate. Interment will follow in Memorial Park Cemetery. The family will receive friends Tuesday from 3:00pm to 5:00pm and 6:00pm to 8:00pm at the funeral home. Mr. Whitmire passed away Sunday January 29 following a sudden illness. Mr. Whitmire was born in Jackson County to the late Jay Whitmire and Ruby Hogan Whitmire. After graduating from the University of Georgia, Kenneth went to work for Gold Kist Poultry in 1960. Shortly after, he was drafted into the Army. He then returned to Gold Kist where he continued to work rising to the office of Vice President of the Poultry Group. He retired in 1999. His career carried him all over Georgia and Alabama finally landing him in Atlanta in 1981. In 1989 he relocated to Roswell where he was in current residence. He attended Alpharetta United Methodist Church. Mr. Whitmire loved Golf, Snow Skiing and was a handy man that loved fixing any problem or issue. He was a loving Husband, Father and Grandfather. He was preceded in death by his Twin Brother Keith Whitmire. Survivors include Wife Shirley Whitmire, Roswell, Son Greg Whitmire, Son and Daughter-in-Law, Chris and Leigh Whitmire, Marietta, Daughter Sonya Whitmire, Atlanta, Aunt Jesse Garrett, Gainesville, Sister and Brother-in-law Sherry and Joe Dale, Gainesville, Sister-in-Law Louise Smith, Flowery Branch, Grandchildren Emily Whitmire, Ben Whitmire and a number of nieces and nephews. Flowers are accepted or donations may be made the Leukemia and Lymphoma Association Donor Services P.O. Box 4072 Pittsfield, MA 01202 or Children’s Healthcare of Atlanta Children’s Foundation 1687 Tullie Circle N.E. Atlanta, GA 30329 Online condolences may be made online at wardsfh.com. Ward’s Funeral Home 758 Main Street Gainesville in charge of arrangements.

The family of Kenneth Whitmire created this Life Tributes page to make it easy to share your memories.

Send flowers to the Whitmire family.