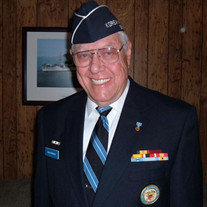 Paul Franklin Scroggs, Jr., age 87, passed away peacefully after an extended period of declining health. He led a colorful life and savored every moment of it. Paul grew up in Gainesville before Browns Bridge Rd. was paved. He played and fished in the woods and creek and often rode his bike over to the local airport to see the planes take off and land. He talked about listening to the radio and learning about the attack on Pearl Harbor. He was patriotic even as a boy. In 1952, Paul enlisted in the US Navy and soon found himself aboard the USS Pickaway in the waters of Korea. He was a radioman, earning the rank of RM2. After leaving the Navy, Paul began building his career with the USDA by taking any job that no one else would do – the worst and dirtiest jobs but, in doing so, built his knowledge base and resume and learned how to inspect every kind of consumable animal for wholesomeness. By the time he retired from the USDA, Paul had received the prestigious position of Program Review Officer, one of only 30 in the nation. Despite traveling extensively due to his job, Paul earned his Bachelor’s degree in Food Science Technology, provided technical support for Kansas State University to begin offering the first Food Science Technology degree, and earned his private pilot’s license. Upon retirement, Paul returned to his favorite hobbies: old cars, fishing, hunting, flying, motorcycles and reading his beloved WWII history books. He was also a member and the last serving president of the Korean War Veterans of Georgia, Inc. until its formal disbandment in April 2019. Paul loved the simple things in life: a good garden tomato sandwich, seeing his grandchildren, mayo-banana or pineapple-mayo sandwiches, wearing overalls, going to the farmers market, sitting in the swing in the backyard, reminiscing or embellishing tales with his childhood buddies at the “liars’ table” for breakfast, teasing everyone around him, and grilling his famous ribeye steaks. Mostly though, he loved life, his family, Central Baptist Church, and Jesus. Paul will be truly missed. He had an incredible sense of humor, a quick wit, a deep delightful belly laugh, and a very mischievous side. Humorous stories about his childhood, youth, military, and career abound. Paul was preceded in death by his parents, Paul Sr. and Pallie Scroggs, son, David Scroggs, and sister, Bobbie Jean Spinks. Paul leaves behind his loving wife of 37 years, Rebecca, sons Doug Scroggs (Pam) of Young Harris, Jimmy Hale (Jessica) of Gainesville, Jeff Hale of Flowery Branch, nine grandchildren: Julie Bryan; Jake and Katie Scroggs; Chris, Matt, Karlee, Gracie, Jadyn, and Kalia Hale; and nephews and cousins. In lieu of flowers, all donations are asked to be made to Berry College to fund scholarships for descendants of Korean War Veterans at: Korean War Veterans International Scholarship Fund, Berry College, 2277 Martha Berry Hwy., Rome, GA 30149 or Central Baptist Church, 785 Main St. SW, Gainesville, GA 30501. Memorial services for Paul will be held Saturday December 28, 2019 at 2:00 p.m. at the Ward’s Funeral Home Chapel with Rev. Earl Pirkle officiating. The family will receive friends from 12 Noon until 2:00 p.m. at the funeral home. Online condolences & memories may be shared with the family at www.wardsfh.com Ward’s Funeral Home of Gainesville is honored to serve the family of Paul F. Scroggs, Jr.

Paul Franklin Scroggs, Jr., age 87, passed away peacefully after an extended period of declining health. He led a colorful life and savored every moment of it. Paul grew up in Gainesville before Browns Bridge Rd. was paved. He played and... View Obituary & Service Information

The family of Paul F. Scroggs, Jr. created this Life Tributes page to make it easy to share your memories.

Send flowers to the Scroggs, family.