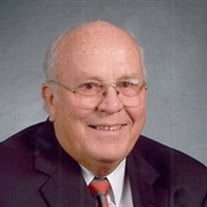 Funeral services are scheduled for 2 p.m. Saturday, July 6, 2013 at Westside Baptist Church for  Ray Cooper Spinks,  age 79, of Oakwood.  Rev. Mike Taylor, Rev. Dan Fuller and Rev. John Spinks will officiate. Interment will follow in Alta Vista Cemetery. The family will receive friends Friday from 2-4 p.m. And 6-8 p.m. At the funeral home. Mr. Spinks passed away Tuesday, July 2, 2013. Mr. Spinks was born in Athens, Georgia to the late Cicero and Ina Cooper Spinks. He was a loving husband, father, grandfather and was a dedicated soul-winner for his Lord Jesus Christ. He was also preceded in death by his sister, Beverly Spinks. A member of Westside Baptist Church in Gainesville, he served in the United States Navy during the Korean War on the ship USS Magoffin. Mr. Spinks graduated from Athens Business College in Athens. Georgia in May 1960 and retired from General Motors in Doraville, GA , where he worked for over 30 years. Survivors include his wife of 47 years, Bobby Scroggs Spinks of Oakwood; sons and daughters in laws, John and Jill Spinks, Jasen and Claudia Spinks, all of Oakwood; very special granddaughter,  Elysa Regan Spinks of Oakwood; twin sister and brother in law, Fay and Rev. Dan Fuller of Watkinsville, GA.; brother, Millard C. Spinks of Colbert, GA., brother in law and sister in law Paul and Rebecca Scroggs of Oakwood; many nieces and nephews. Those wishing may make contributions to the American Cancer Society or Gideon's International. Online condolences may be made to wardsfh.com Wards Funeral Home 758 Main Street Gainesville is in charge of arrangements.

The family of Ray Cooper Spinks created this Life Tributes page to make it easy to share your memories.