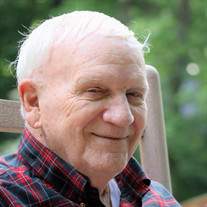 Robert Edward “Bob” Weatherly, Jr., age 87 of Gainesville entered heaven Friday Sept. 3, 2021 at the Northeast Georgia Medical Center, Gainesville with his wife, Jo by his side . Bob was born March 3, 1934 in Athens, Georgia to the late Robert Edward, Sr, & Willie Wheeler Weatherly. He earned his associate’s degree at Gainesville Junior College. Bob served his Country in the United States Air Force having served during the Korean War. He was retired from the Georgia State Patrol as a Captain with several years of service. During his time at the State Patrol, during the fall he served in the security detail that guarded the University of Georgia Bulldogs. He loved that detail and he had the opportunity to guard Prince Charles when he attended the UGA vs Kentucky game in 1977. He served during the Hershel Walker, Buck Belue era and was proud to protect the Bulldogs while wearing his Ga. State Blue. Bob’s life was full of service, he also served as a deacon at Riverbend Baptist Church where he was a member. He earned his piolet’s license and flew a small aircraft and he enjoyed flying. Most of all he loved his family and was the best Grandy & will be missed dearly. He was preceded in death by his sister, Ellen Weatherly. He is survived by his loving wife, Josephine “Jo” Weatherly; daughter, Linda (Terry) English; son, Glen W. Weatherly; granddaughters, Carley English & Rachell Pursley; niece, Kathy Whitfield; nephew, Eddie Wortham. raveside services honoring Bob will be held 2:00 p.m. Tuesday September 7, 2021 at the Evergreen Memorial Park in Athens with Rev. Maxey Ladd officiating. The family is asking for all those attending to please wear a mask and social distance due to the rise in covid. If you are planning on going to the cemetery in the procession, please assemble at the funeral home by 12:40 p.m. on Tuesday. For those not getting to attend we will livestream the service on our funeral home Facebook page. In lieu of flowers, please make donations to University of North Georgia Foundation, Inc P.O. Box 1599 Dahlonega, GA 30533. Write checks to UNG Department of Physical Therapy. Please share online condolences and memories with the family at www.wardsfh.com. Ward’s Funeral Home is honored to serve the family of Robert Edward “Bob” Weatherly, Jr. Ward’s Funeral Home & Cremation Services, Gainesville. “A Family Funeral Home”

The family of Robert Edward "Bob" Weatherly, Jr. created this Life Tributes page to make it easy to share your memories.

Send flowers to the Weatherly, family.